The bandit is an attacker unit unlocked at Player Level 4, costing 6.

Bandit's attacking speed and moving speed are very slow, however, bandit has a good amount of health, damage and AOE attack at melee range, allowing them to deal good damage to large groups of units. Early game, they are extremely competent fighters and hard to defeat, though later on, they often don’t have enough HP to get a single hit in before dying in combat due to their low attack speed. To continue using them effectively, it is best to equip them with high level weapons.

Grim Reaper Scythe: trades some hitpoints for much more speed, at high level it can also inflict curse.

Anchor Axe: greatly increases hitpoints and attack power, with a substantial boost to attack radius, making this unit overall much stronger but at significantly higher cost. 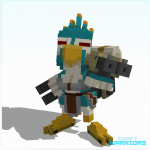